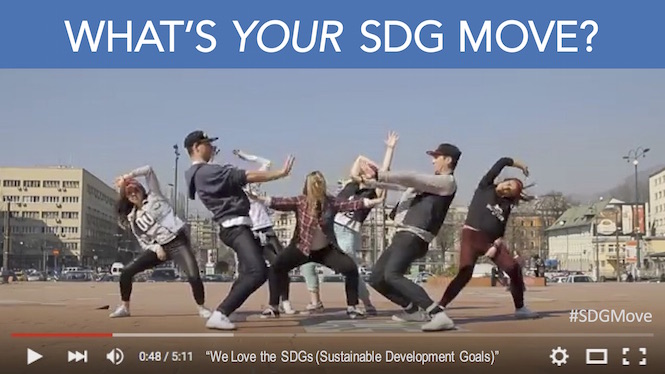 On New Year’s Day, 2016, 17Goals launched a new global campaign to raise awareness and create a sense of commitment to the SDGs … with a song, a music video, and a global invitation to “move”.

The “SDGMove” campaign builds on the music video, which features people from all over the world dancing to a new pop song, We Love the SDGs. The basic idea: watch the video and listen to the song, then film (or photograph, or document) your own “SDG Move,” and post it online. The hashtag for the global campaign is #SDGMove.

An “SDG Move” can be an actual dance move (as in the video), but it can also be any other action a person or organization is taking, in order to help put the SDGs into motion. It could be anything from a poem to a painting, from a community project to a major policy initiative.

To learn more, and to watch the new music video, visit the 17Goals.org/SDGMove website … and please spread the word in your own networks!