The Story of “We Love the SDGs”

Alan AtKisson’s song for 17Goals, “We Love the SDGs,” is starting to get noticed. Greenbiz.com is an enthusiastic promoter and just published this short piece, by Alan, that links people to the music video and the #SDGMove campaign website. Thanks to Joel Makower and his colleagues! 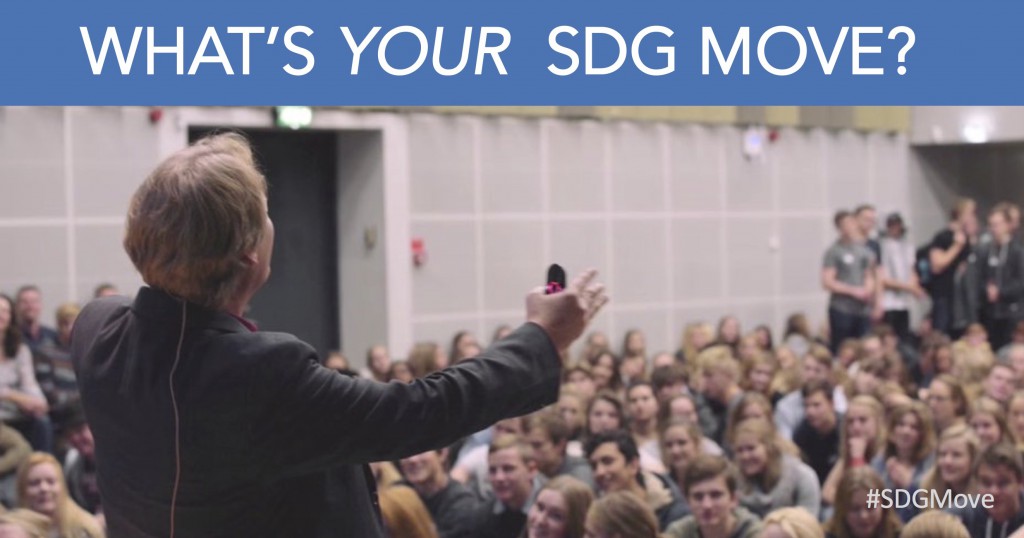 Alan performing “We Love the SDGs” for students in Denmark

Why did I write a song about the SDGs? A pop-music, get-up-and-dance song, about the United Nations’ global Sustainable Development Goals? With a music video on top?

The answer is simple: I was happy. Really happy.

Last September I found myself dancing around the kitchen to a little melody that popped into my head. (Where do melodies come from? I’ve been a songwriter all my life, and I still don’t know.)

OK, I finally said to myself, after the catchy little tune just wouldn’t go away: This seems to be a song. What’s the song about?

It took me about 90 seconds of reflection to figure it out: the SDGs. The universal adoption of the Sustainable Development Goals by all the world’s nations — marking a huge global milestone, something that many thousands of people had been working to achieve, over many years — was literally making me dance around the kitchen.

So I sat down with a list of the SDGs, a notebook and my guitar. Two hours later, the basic song was complete.

And the chorus covered every one of the 17 goals. (I’ve even written a study guide.)

Next step: I contacted my friend and recording engineer, Andreas Bauman. Andreas is amazing: Within two weeks, we had recorded the basic tracks, with a stellar band of top Swedish studio musicians that he put together. At Andreas’ suggestion, I wrote the rap for the middle part of the song — you’ll find all 17 goals in that text, too. Reinterpreted.

Then came October. My new friend Bente Milton, a remarkable film producer and social entrepreneur in Denmark, had invited me to keynote a conference called “Accelerating Change.” I told her about the song and the 17goals.org initiative we were setting up to promote awareness of the SDGs.

“Why don’t we make this conference the launch event, for the song and the initiative?” (I can’t remember which one of us said this first.)

And why don’t we film the first performance? And as the conference involves 500 high https://sdarcwellness.com/buy-prednisone-online/ school students, why don’t we involve them, too?

And then turn it all into a music video? And then, spread that around the world? Bente was full of ideas.

So we filmed it, and Bente and her team went to work, assembling video footage of people dancing from around the world, matching them to the rhythm of the song. Andreas fine-tuned the mix, blending in the voices of all those students singing along with the chorus.

Voilà! A globe-trotting music video. “We Love the SDGs” already has been shown at one United Nations event, and several countries are planning to use it as part of their national awareness-raising campaigns. And that was before the official launch Jan. 1, 2016.

Now comes the fun part: spreading this video around the world. Because that’s what we aim to do with this song. What’s our goal?

Partly, I just want to share some of the happiness I felt, watching all the world’s governments come together — for the first time in human history — on a common vision, goals and targets for a sustainable future. I think the whole world could use a little happiness right now.

And partly, we want to get more folks moving  —  physically, educationally, politically, in beautiful and creative and thoughtful ways, to make those 17 goals a reality.

That’s the idea behind our global social media campaign, #SDGMove. The ingredients are simple:

You don’t have to dance to participate. We are playing with words here: your “SDG Move” might be a dance move (and we’re hoping for lots of those to turn up on the Internet). But we’re also looking for “moves” of all kinds: projects, policies, poems, paintings, you name it. Just post it — and tag it.

This is year one of the SDG journey. These goals will be our guiding star for the next 15 years. The more seriously we take them, the more focus and action we put into them, the more real they become.

But also — the more music, dance and simple human happiness we put into this whole sustainable development movement, the more likely we are to see it for what it really is: Our best hope for a bright future.