Get more ambitious on the SDGs, leaders tell the EU

A new coalition of national organizations, cities, NGOs, research institutes and other “non-state actors” is calling for a more concerted effort on the part of the European Union to achieve the 17 Sustainable Development Goals. 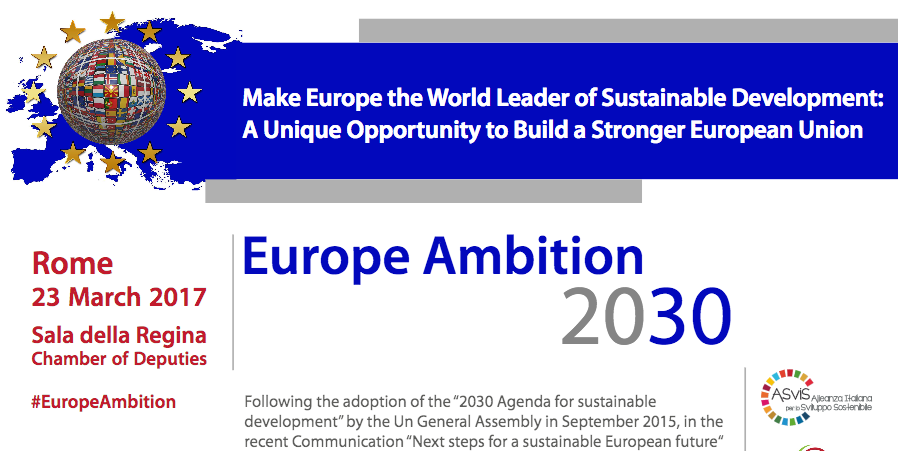 Going by the name “Europe Ambition 2030,” the group held its first conference on 23 March, 2017 in Rome. Participants at the conference included current and former senior EU officials, business and NGO leaders, and local-level leaders such as the mayor of Stockholm.

In a statement released before the conference, the group noted that the current EU approach to the SDGs “does not seem ambitious enough for an institution that is facing its worse crisis since its foundation,” as President Juncker has recently described it.

Instead, the group is calling for “adopting the SDGs as an overall political framework” for the European Union, which would in turn require “a redesign of EU governance and policies, as well as of the relations with its Neighbours.”

Writing in advance of the conference in Euractiv, Céline Charveriat — executive director of the Institute for European Environmental Policy — noted that there “less than 5,000 days” remaining before the SDG deadline of 2030, and that “implementing the SDGs is a unique opportunity to come together again and achieve a safer, fairer and more sustainable Europe.”

The founding conference for this informally constituted group was hosted by the Italian Alliance for Sustainable Development, a broad coalition of groups whose official spokesperson is Enrico Giovannini, an economist who has held many positions in Europe, including Chief Statistician of the OECD and Minister of Labour and Social Policies for Italy.