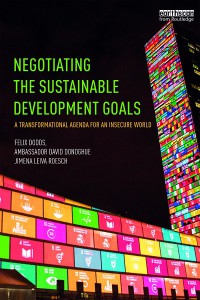 For most of us in the world, our introduction to the Sustainable Development Goals began on September 25, 2015 when they were officially adopted by the United Nations. But for the UN General Assembly Open Working Group, that date was the triumphant culmination of over three years of meetings, negotiations, and hard work.

If you’re curious about what took place behind the scenes, you might consider reading the soon to be released historical book, Negotiating the Sustainable Development Goals: A transformational agenda for an insecure world; written by three individuals who were engaged in the development of the SDGs from the very beginning, Felix Dodds, Ambassador David Donoghue, and Jimena Leiva Roesch.

“The book reviews how the SDGs were developed, what happened in key meetings and how this transformational agenda, which took more than three years to negotiate, came together in September 2015. It dissects and analyzes the meetings, organizations and individuals that played key roles in their development. It provides fascinating insights into the subtleties and challenges of high-level negotiation processes of governments and stakeholders, and into how the SDGs were debated, formulated and agreed. It is essential reading for all interested in the UN, sustainable development and the future of the planet and humankind,” (Publisher’s summary).